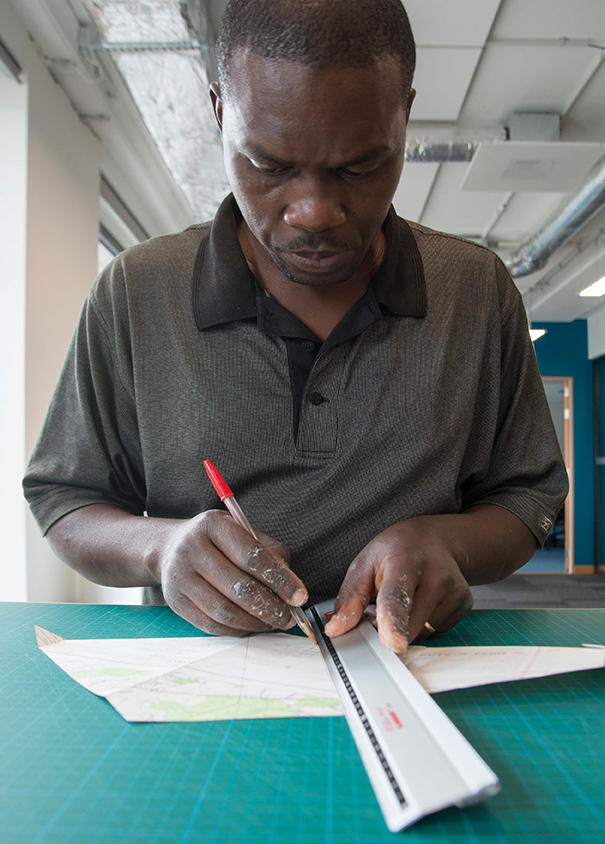 Cardboard is the basic material with which Jean Katambayi builds sculptures. It is a perishable medium and,as he states in an interview, a poor conductor for electricity. The sculptures are based on working drawings, withtechnical and associative links. They form the diaries of the sculptures and will probably even last longer than theobjects itself. References to mathematics and electricity are a common thread throughout his notes. As if he wantedto say that science, fiction and contemporary myths go hand in hand. The sketches contain calculations, commentsto himself (“à inventer: la colle conductrice”) and associations (“the working ant: works without getting tired”).Jean Katambayi is always looking for the communicating vessels, for connections and kindred tracks.

The robot, the machine is an invention of man. What if the artist is a radar? It could be a synonym for ‘seer’.The cardboard landscape becomes a self-invented measuring instrument. What is the tension between Africa andEurope? A traditional analog volt meter uses a soft iron meter or a rotary coil meter according to the principle ofthe galvanometer. The artist constructs and deconstructs perspectives: Congo, with on the one hand his mineralwealth and on the other side the reality of the light bulb in Lubumbashi, which due to a lack of daily availableelectricity will not glow every day.

Is the wizard travelling or does the Westerner fly? The ethics of living together could be an alternative subtitle forthe well-known Afrolamps of Jean Katambayi. He shows these large format drawings for the first time in 2016at trampoline in Antwerp. Over the years they have become a permanent part of his critical artistic practice.The lamp becomes a plural. He draws them with a compass and ruler. The light bulb is invented over and overagain. The shape changes, mutates, the lamp becomes an abstraction. Of all the geometric figures, the circledominates in these drawings. A glimpse of the different parts remains visible: the pressure discharge tube,the arbor, stem, filament supports, etc… In his notes, Jean Katambayi writes about these Afrolamps: “L’ampouleafricaine, l’afrolampe souffre de lumière noire suite à une série de négligences. Elle devient une série et laisse entrevoirune animation dans sa composition.”

“We do not know where we are going,” is the title of one of his exhibitions. After which a publication appearswith the follow-up title: “… but we know how it goes.” In addition to the Afrolamps, a new series appears in 2018:Afrovisalamps. For more than two weeks the artist is staying in Nairobi, the capital of Kenya, to be able to obtaina travel visa. In the meantime, he draws. The lamps seem to have become pots. He models different forms withhis compass. The ruler shades. The decorative forms always come in pairs and are supplemented with words ormolecular formulas of chemical substances. Among the word we find VISA, lie, freedom, Why, IMF, Passport,education, energy, God, art, Valuta, cobalt, KITENDI (‘fashion’ in Lingala), water, test, eclipse, jamais, Tout Droit,Migrant, Soft, Oui We Will, Coltan. The Afrovisalamps drawings, made a with marker, travel within the handluggage of a friend and are exhibited in Belgium, but without the presence of the artist. Coltan travels in everymobile phone. Cobalt is mined in RDC and disappears thousands of kilometers further in technological devices.

Art is being transported worldwide. In the meantime, Europe is closing its borders for exchange. It is this paradoxthat Jean Katambayi’s artistic practice draws our attention to. In which direction does cultural exchange go?In recent years he has collaborated with many art organizations and made work within a large number of artist inresidency programs. At local flea markets he would then find residual material and old geographic maps.He would transform those maps with cardboard, glue and paint into new geographical constellations. He wouldlisten, use dialogue to explore new mind maps and set up a temporary laboratory. His artworks are thus createdon location and using consultation as a working method. They indirectly point out the different perspectives anddirections of interdependence. Poetry and electricity: man is more than an economic being. 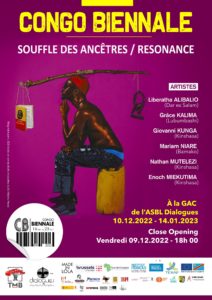 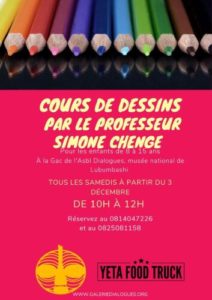